What if I told you there’s a place in Brown County where today’s teenagers voluntarily give up all access to their smartphones, and many of the other conveniences and comforts they’re used to? “That must be some special place,” you might say. Camp Palawopec, tucked in the hills just north of Nashville, is indeed a special place—but its attraction for today’s campers is the same as it was when it opened over a half-century ago.

Turning off of Clay Lick Road onto the 300-acre grounds of beautiful scenery and terrain, the first thing you notice is Palawopec’s welcoming vibe. Young counselors greet you in passing with waves and genuine smiles, and campers, many of whom were strangers only days before, treat each other like longtime friends. That’s no accident, says Mike Nickels, the camp’s founder and director. “More than anything else, we stress that this is a friendly place,” he says. “It’s imperative that our staff be friends to our campers from the moment they arrive. And the friendships the kids make with each other can last a lifetime.”

Among the activities campers here enjoy are the old standbys: hikes in the forests of its rolling hills, swimming and rafting at the lake, crafts, field games, campfire songs and skits, archery. For more adventurous spirits, Palawopec also offers zip lines, rope bridges, and even day trips offsite to places like Red River Gorge. But unlike what you’ll find at many summer camps, none of it is mandatory, and activity time is largely unstructured. “So much of kids’ time at school and home is directed and programmed,” says Mike. “We let them think for themselves. They decide what they want to do with their time here.”

With one important exception: screen time. Palawopec campers aren’t allowed to bring electronic devices with them, and none of the camp’s activities include them. For Mike, the policy isn’t anti-technology—it’s pro-fun. “On our camper applications, we ask parents why they’re sending their kids here,” he says. “Every year I see more people saying ‘To get them off their phone, off their video games, their tablet.’ And we keep them so busy here enjoying the outdoors and making friends, they don’t have time to miss their devices.” 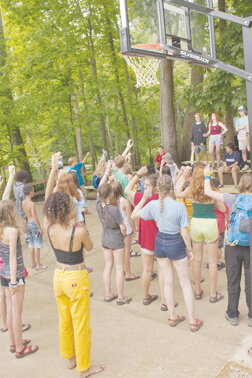 Mike’s dedication to the wonders of nature and genuine human connection has been cultivated over a lifetime. As a young kid in suburban Indianapolis, he lived for the summers he spent in Brown County as a camper at Gnaw Bone (“There was nothing better in the world”), and after he “aged out,” he became a counselor there. By the time he was a student at Indiana University, Mike couldn’t get camp out of his mind, and soon he was making plans to take it to the next level. He spent his weekends driving around Brown County looking for a spot for his own camp, and, thanks to a tip from a local, he finally found the one on Clay Lick Road. Camp Palawopec opened with nine campers in 1965; now Mike’s hosting over 500 campers and employing over a hundred counselors a year. He and his wife Sydney have raised their own family in the Director’s cabin over the years, and they haven’t missed a single one of the fifty-five summers of camp.

Which means retirement may be in the cards for Mike—one of these days, anyhow. “If I can lock him down somewhere where he’ll sit still,” chuckles Nate, Mike’s son and a lifelong resident of the Camp. Having grown up with Mike’s vision for the campers’ experience and his own love and respect for the outdoors, Nate’s the perfect choice for carrying on the Palawopec tradition. “Staff know and respect him, the campers love him, and he knows how to repair everything around here,” Mike says. “He’ll keep the camp going after I can’t anymore.”

And all signs indicate that Palawopec will keep going strong.
Enrollment has been up in past years, with campers being turned away for the first time ever. But Mike can’t do anything about it: many campers come back year after year, and the Camp’s advertising is almost entirely word-of-mouth. “I’ll see parents who say their kids have talked about nothing but camp since they left. They can’t wait to get back. That’s some powerful promotion,” he says.

For the Nickels family, there’s one more marker of success, and one that they’ve been delighted to see over the decades: Palawopec’s long-term effects. “Our campers grow up to be adults, and we hear from them all the time,” says Nate. “No matter what they end up doing in life, camp stays with them. Some of them are still in contact with friends they made at camp. No matter what they end up doing in life, they might choose to live in a forested area because of camp.” Mike agrees, adding, “Their appreciation for the outdoors never leaves them. They’re more independent thinkers. In some cases, they now sit on boards or committees where they can advocate for the preservation of nature or outdoor education. And then we see their own kids come here as campers.”