Theodore Clement Steele, an impressionist painter and one of the most famous of Hoosier Group painters of the 20th Century, was born September 11, 1847 near Gosport, Indiana. His masterpieces in Indiana landscapes and formal portraiture are listed in many websites, catalogues, and museum and private collections.

He was the eldest of eight children of Samuel Hamilton Steele, a farmer and saddle maker, and Harriett Newell Evans Steele. In 1852 the family moved to Waveland where Steele’s interest in art quickened. Steele received a gift of a small paint set from an uncle and began his first formal art training at the Waveland Academy at the age of twelve. He also began playing the flute. Family stories reported that young Theodore associated colors with sounds. When he saw a painting he associated it with a sound or musical piece. Likewise, images came to mind when he listened to music.

When his father died at the age of 38 years, Theodore took over much of the farm work. Steele would tie colored ribbons to the plow handles so that he could watch them in the wind and see the effect the fluttering had on surrounding colors.

Steele married Mary Elizabeth Lakin, a fellow Waveland student and nature lover, on Valentine’s Day 1870. They raised two sons, Brandt—whose given name was “Rembrandt” after the Old Master—and Shirley; daughter Margaret was called Daisy. With the support of patrons, the entire family went to Europe where Steele received additional art training at the Royal Academy in Munich, Germany from 1880–1885. Upon returning to Indianapolis and throughout the 1890s, Steele devoted the summer months to painting landscapes, the winter months to portraits. His reputation brought commissions to paint many noteworthy Americans. In 1889 Steele opened the Indiana School of Arts at the northwest corner on Monument Circle in Indianapolis. His wife died in 1899. 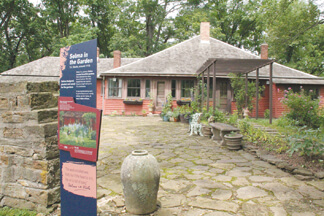 In 1907 Steele purchased hilltop acreage near Belmont, Indiana, between Nashville and Bloomington, where local builder William Quick would build the home/studio. In late May, Steele stayed in Bloomington to paint the portrait of William Lowe Bryan, president of Indiana University. On August 9 of that year, Steele wed Selma Neubacher, when the Brown County house was completed.

His bride would later describe her first trip to the hilltop home: “I was stunned by the dramatic spectacle spread out before me. There was a sweep of great distances. There were cloud shadows of deep purple hue passing rapidly over one range of the hills to the other.”
Twenty-three years younger than Steele, Selma was devoted to the new household for “the painter,” as she always referred to her husband, and she spent much time landscaping gardens on their property. Local women were engaged to help with the upkeep of the home. 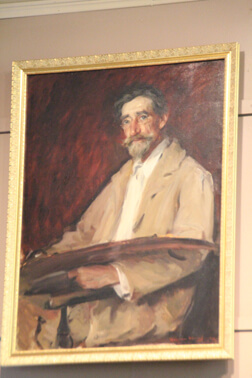 The couple’s love of music, art, and conversations was shared with the local people and artist friends alike. Their homestead was a curiosity to many who wondered at the lack of crops on the Steele’s land. Mrs. Steele noticed her husband’s daily focused dedication to his art. She ran the home efficiently and with her own distinct style so that visitors were hospitably received and her husband’s painting would not be interrupted.

The hilltop breezes caught by the screening on the porch and doors gave the home its name: The House of the Singing Winds.
Friend and artist, Gustave Baumann, engraved a stone mantelpiece over the fireplace in the living room: “Every morning I take off my hat to the beauty of the world.”

Assuming fulltime residency in Brown County in 1912, the Steeles were joined by other artists. Steele’s reputation as an impressionist continued to rise and in 1913 he was elected as an associate artist to the National Academy of Design in New York. In 1922 Steele was the Indiana University’s first artist-in-residence. He and Selma rented a home in Bloomington but returned to their House of the Singing Wind in the summer. Over his career there were many honors and exhibitions of his work.

A heart attack weakened T.C. Steele in December 1925. Though he continued painting, he became ill the following early summer and died at home in Brown County on July 24, 1926. Hundreds attended a simple memorial at the House of the Singing Winds. The burial site of his cremains is at the bottom of the hill, with the epitaph reading, “Beauty Outlives Everything.”

His widow recognized that T.C. Steele’s artistic genius was the legacy of all Hoosiers and bequeathed this home and studio to the people of Indiana.

The Steeles’ home is located at 4220 T.C. Steele Road, Nashville and is open to the public Tuesday through Sunday 10 a.m. to 5 p.m.
Cathy Ferree, president and CEO of the Indiana State Museum and Historic Sites said, “With the new visitor center and activities, we’re providing an improved visitor experience for everyone who comes to the site.” 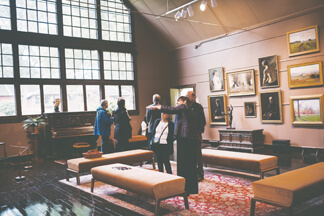 Interpretation at the house and studio buildings show in a multi-sensory way how life was in the 1920s. Background music from that period and scents coming from the plantings in the gardens, and aromas from the kitchen beckon back to days of a living household. Visitors can see original furnishings, books, letters on Steele’s desk and the scrapbooks of landscaping ideas collected by Selma.

The Visitor Center is 4,600 square feet and includes indoor restrooms; programming space; and a gift shop with literature about T.C. Steele and plein air painting; local artists and products; and convenience items such as insect repellants for hiking the trails. You can view a video introduction to the site that explains possible activity choices. New programming space will allow the hosting of corporate retreats and painting workshops.

The Large Studio that Steele used has been repainted and improved lighting has been installed. Collection paintings will be rotated. Exhibits will show how plein air painting is done and the perspectives employed by T.C. Steele.

The visitor center and new site activities are supported by the State of Indiana, Friends of T.C. Steele, various grant funders, as well as private donors.