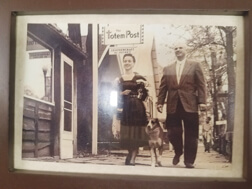 Just a few years shy of celebrating its 70th year in business, The Totem Post is Nashville’s oldest, continuously operated store. In fact, it is owned and operated by the same family and is still located in the same location at 78 South Van Buren Street.

The store was opened in 1952 by Bill and Marielle Jockey, ballroom dancers who were on a break from performing on a cruise ship that sailed from New York to Buenos Aires.

“My dad’s sister brought them here for a visit at the peak of autumn beauty and they absolutely fell in love,” said Liana Franklin, the Jockey’s daughter and now store owner. “A few months later Bud Austin’s leather business was for sale, so they decided to purchase the store and stay in Nashville.”

Bud taught them his leather craft techniques, but the true focus of the store was on items from around the world.

“They were always very interested in other cultures and so they sold items from all over the world,” Liana said. “They were one of only five stores in town, so they could basically sell anything they wanted.”
Native American jewelry became a focus for Liana’s mother.

“She had traveled out west as a teenager and had fallen in love with the culture and the art and jewelry,” Liana said. “She wanted to start selling it in the store because of that love and because there were very few places in the Midwest that sold Native American jewelry at that time.”

The remaining merchandise is much the same, but with so many shops in town now, it has begun to specialize in more totem related items with a spiritual nature. The focus is on Native American items, animals, rocks, music, and jewelry—all things that bring you closer to spiritual insight. 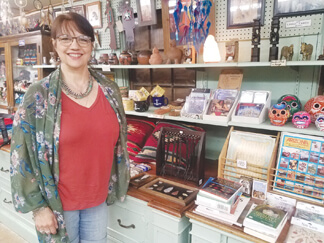 “I basically grew up in the back of the store,” she said. “When we were home, we would be marking stuff for the store. It’s all I ever knew. I learned that family and the business were our life. They were the same, they weren’t separate things.”

After graduating high school, Liana went on to college and an internship with Disneyland.

“As a teenager, coming back to run the store was not something I was interested in,” she said. “But when I was at Disney, I realized that people didn’t care about each other like they did in Nashville. I missed that.”

In 1981, Liana returned to Nashville to help run the store. Her father had retired and her mother needed help.

“We ran the store together for about 20 years,” Liana said. “Those were special years. We became really good buddies.”

While she runs the business today with her own ideas, Liana said she learned a great deal from her parents.

“Dad was very quiet and methodical. I learned a business sense from him,” she said. “He taught me that you have to have something in the store for every member of the family. That way nobody wants to leave. It’s about meeting the entire family where they are at that moment.”

She also learned work ethic from her father.

“He was at the store all of the time,” she said. “If the weather was bad and he couldn’t drive, he would walk to work.”

From her mother, Liana learned to genuinely connect with customers.

“She had a really good sense for what would sell. She always felt, and I do too, that customers were friends, not just people who buy stuff. She felt a great devotion to the customers and to this town,” she said.

Liana’s two children, William, 21, and Lily, 17, had similar experiences growing up with the store.

When William was 6, he made things out of paper and set up a table in front of the store to try to sell them.

“One day he decided he was going to tell fortunes. He told me he was only going to tell good fortunes because nobody wants to hear bad fortunes,” Liana said. “He had a sign that said, ‘Fortunes. $1 or free, whichever you want.’ I think he made $13 that day.”

“Neither of them want the store to go anywhere, so I hope it will continue beyond me,” Liana said. “I think it’s cool to be part of a legacy.”

While the store looks much the same as it did 67 years ago, some of the items on display have changed.

“Over the years, we have had to change directions a bit. I’ve learned to roll with what’s going on in the town and in the country. The store is now focused on nature and animals,” Liana said. “And I’m very spiritual, so that is the way I have geared the store. I try to sell things that are peaceful and meditative. We love the stuff we sell here. It’s kind of like a treasure hunt.”

What has not changed, Liana said, is the Totem Post’s love of customers.

“So often, customers just want to come in and talk. I think our store is nostalgic,” Liana said. “Customers are like our family. We have so many that come back every year or members of the same family will come back generation after generation. It’s neat.”

Liana said she feel blessed by her customers, the store’s history, and to be a part of Nashville.

“I think when you feel like art is life, you are not in competition with the other shops,” she said. “When you see the beauty in the other stores, you just want to promote each other. It’s very supportive and friendly.”