It’s a Thursday afternoon in a meeting room at the Brown County YMCA. A group of locals sits in a circle around Kara Barnard, dulcimers and guitars in hand, eager to learn, smiles on their faces. These are just a few of the 80-plus students Kara sees each week in the private and group lessons she offers, but you’d never know she’s so busy: her encouraging tone and relaxed demeanor make everyone feel valued, engaged, and welcomed as a unique maker of music. 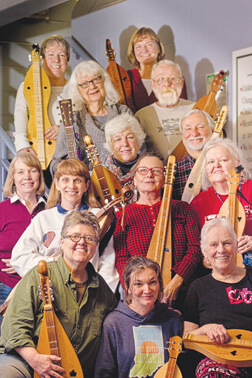 According to Kara, part of her success is about her passion for music and a lifetime of teaching. From giving younger players lessons in high school to her years as a full-time guitar instructor, she’s had lots of time to perfect her approach to music instruction. “In my twenties, Kevin Franklin at Guitar Works in Greenwood really pushed me to take up teaching,” Kara says. “I had 60 students a week there, teaching guitar, banjo, dulcimer. I did that for about ten years, and it really taught me how to tap into how different people learn, and how to help them identify and overcome the obstacles in their playing.” Years after going solo with her teaching in Brown County, Kara still relies on a few key strategies: stay positive, believe in every student’s ability to learn, and share in their joy in mastering a difficult lesson.

But teaching people music goes much deeper than songs and instruments for Kara—it’s truly a transcendent experience. “Music is about vibration, and that vibration connects us to everything in nature,” she explains. “Anybody who claims not to feel that rhythm has never studied the wag of a dog’s tail, or the sound of a cat scratching, or the metronome of the heartbeat in their own chest.” Playing music with others, she says, puts us in communion with each other, and ultimately, with the universe.

If you think this sounds like something out of eastern philosophy, you’d be right. Somehow, between giving lessons, performing and competing internationally, founding the Indiana State Fingerstyle Guitar Competition, and running her own businesses, Kara’s also been a longtime student of Buddhism, taking her vows with world-renowned monk and educator Thích Nhất Hạnh. “Sitting at his feet for a week was a high point in my life,” she remembers.

But make no mistake: Kara’s spirit may be open to the infinite possibilities of the universe, but her feet are planted firmly in the realities of Midwestern business ownership. Along with her former student Kristin Thompson, she’s a proprietor of Weed Patch Music, a Nashville shop specializing in custom-built instruments and forging connections with its customers. 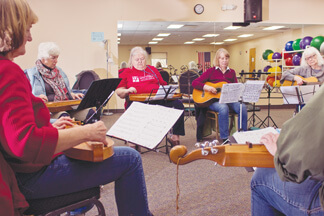 “It’s hard sometimes, balancing Buddhist principles with the demands of retail,” she says. “Staying present in the moment, striving to always maintain good energy, it can be a challenge. But we do it, and whether it’s people who’ve never heard of Weed Patch coming in off the street, or seasoned musicians from all over who seek us out specifically, they’ll find us to be human beings who want to talk to them, who want to share with them the love we have for what we sell.”

The merchandise at Weed Patch—stringed instruments made with pride by local builders—includes handmade guitars, dulcimers, banjos, and mandolins—every piece set up to sound its best. “There’s nothing like holding a musical instrument, knowing where it comes from and hearing how it sounds,” Kara says. “That’s why Amazon won’t ever take the place of stores like ours.”

A few years ago, a conversation with Jon Kay, Director of Traditional Arts Indiana, led Kara to her most recent undertaking. “I was trying to expand out to a new audience, and Jon suggested seniors,” she says. Soon after, Kara launched Silver Strings, a dulcimer instruction program she takes to assisted living facilities in the area. “These are lessons aimed at non-musicians who may be in walkers or wheelchairs. Some have had strokes, and one of my best students is blind.” Silver Strings has been a great success so far, and Kara’s currently developing a plan to pitch the program to a company with facilities in four states. Within ten years, she says, her goal is to take Silver Strings nationwide.

Not surprisingly, though, for Kara the real reward lies in the difference music makes in the lives of her Silver Strings students. “I’ve got the best job in the world. I live the best life. And the people I teach, they fuel me. It’s the most incredible thing, and I’m grateful every day to be able to do it. I’m doing what I was put on the planet to do.”
More information on what Kara’s up to can be found online at , <www.karabarnard.com>, or on Facebook at Kara’s Silver Strings.