If you consider all the jobs George Goehl has had, you might think he has a hard time deciding what he wants to do.

In his 80 years of life, he has tried his hand at many things, from selling carpet to administering a program for people with mental disabilities, among other things. Most didn’t last longer than three years.

But his love of producing decorative metal creations is an exception. His jewelry, wall hangings, bubble wands, and other brazed creations have kept his attention for about 50 years now, and he shows no sign of slowing down. 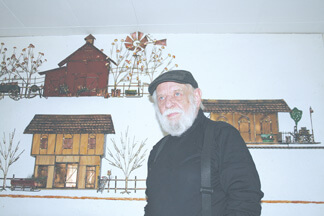 Goehl has been a fixture in the Nashville craft scene since opening a shop in 1975, and his work is now for sale at the Brown County Craft Gallery. In addition, he has posted many how-to videos on the Internet and produced DVDs of his craft. This allows him to stand with one foot in the traditional handmade world of fine craftsmen and the other foot in the modern world of technology.

Born in Columbus, Ohio, in 1938, Goehl was the son of a mechanic and a housewife who later entered the workforce leaving him to grow up “pretty much alone.” He says he was a terrible student in the tiny Pataskala, Ohio, school system and graduated from high school “through the grace of my teachers.”

He said he knew he wasn’t college material, so after a stint in the Air Force where he played saxophone in the military band, and not knowing what else to do, he took a factory job at Western Electric in Columbus, Ohio. Becoming frustrated and angry at producing plastic parts on the factory line, he quit.

“I told myself that I don’t ever want to run another machine,” he said, so in 1963 he took a job selling carpets. That job lasted for three years, and he became a top salesman. But he says the company owner was overbearing, and Goehl had had enough.

“After one great sale I made, I’m thinking, ‘Is this as good as it gets? Is this enough?’”

So at age 27, he enrolled in Ohio State University and did surprisingly well.

“I’m not real intelligent or smart, but I am clever,” Goehl said.
Anthropology appealed to him, so he got his bachelor’s degree in that. A part-time job at a facility for mentally disabled children also spurred his interest, and he received a master’s degree in special education from Ohio State. That led to a job in Mansfield, Ohio, at a facility for mentally disabled, where he was administrator. One of the things that job taught him was a great respect for the way different people figure things out.

“Everybody asks themselves, how do we make sense of this world we’re living in?”

But after about three years, he had lunch with a 30-year veteran of a child welfare program and realized that his work in social service was not something he wanted to do for the next 30 years.

Since college, Goehl had discovered he liked to work with his hands. After he got a torch outfit for a birthday gift one year in the 1970s, he quit the social service job and began metal working in a basement workshop. One thing led to another, and soon he had sales representatives and his brazed metal business began to take off.

He sold the business to Cosco, now a division of Dorel, in Columbus, Indiana, with eight of his designs as a part of the deal. He moved to Indiana to work for the company as a designer, and settled in Brownstown, where a plant was to be built. Tired of the commute to Columbus after the company decided not to build the Brownstown plant, he quit that job and moved to Brown County to operate his own small shop in Nashville. He did that until he went to work for Bartholomew Consolidated School Corporation where he taught special education for about three years.

He had a mail order business going for a while, specializing in bicycle-related objects and doing shows all over the country, usually in connection with bike rallies.

That led to more complicated wall hangings which he has become known for, including scenes which may have bikes, park benches, street lights, newspapers, fences and buildings. He also produces unique bubble wands, butterflies, jewelry, and a variety of decorative objects.

Brazing is a technique which uses high heat to fuse copper, brass, bronze and steel into sculptures and functional or artistic pieces. Goehl works from his home and studio a few miles outside of Nashville.

But Goehl also has an interest in photography and videography, and he’s good at explaining how things work. So in 2003, he began producing how-to-braze videos, and wound up doing 33 DVDs. As technology changed, so did Goehl, and he moved to streaming videos and other instructional pieces on the Internet, where he is paid by the click or download.

“People don’t want to be educated, but everybody wants to learn,” he said.

Goehl’s videos include many self-taught techniques and creative impulses which he willingly shares.

“Some artists don’t want to give away ideas,” he said. “I think that if you give away an idea, the universe will give you two to replace it. It never fails.”