~story and photos by Jeff Tryon

It is a quiet Tuesday evening in Nashville, but inside a little room up at the History Center, a devoted group of citizen journalists has gathered to produce “The Brown County Radio Hour,” the only broadcast devoted entirely to the comings and goings-on in the area.
Heard on the first Sunday morning and Wednesday evening of each month on Bloomington’s volunteer-powered radio station WFHB, the show is a blend of interviews, music, and monologues with one thing in common—they are about Brown County.

“I’ll try to ask intelligent questions,” jokes on-air host and interviewer Dave Seastrom as he settles in behind the microphone to interview a group from the Brown County Opioid Crisis Alliance.

Nothing is scripted or even sketched out in advance, just the gentle questioning of the soft-spoken Seastrom, which tends to put people at ease. Behind a glass window, Engineer Chuck Wills is making sure everything is clearly heard and digitally recorded.

Later, individual pieces are edited, and introductions and other announcements are recorded for what will become the 84th Brown County Radio Hour show.

Guests or story ideas are generated by the core group of about a half dozen people who oversee the creation and production of the show, most of whom have been a part of the Brown County Hour for most of the eight years it has been in production. 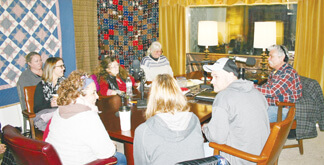 Seastrom said it used to take the group two months, meeting every Tuesday night, to produce one hour of radio. Over time, they slowly developed a formula that now makes it quicker and easier.

“It’s been an evolution,” Seastrom said. “At some point in that evolution, it became clear that what we were really trying to do was to be the ‘Voice of Brown County.’ And what that means is—exactly what happened here tonight. We had the superintendent of schools in here tonight, the president of the League of Women Voters, the Foundation people, and so forth. We have interviewed just about every mover and shaker that we can think of, and we also often have local musicians come in to be interviewed and to perform live original music in the studio.”

Vera Grubbs goes out into the community and interviews artists in their studios. Regular commentators like nature expert Jim Eagleman contribute pieces on different topics.

The show makes note when well-known local people pass away.
“That’s part of the story,” Seastrom said. “We’re trying really hard to represent the totality of the county. It’s also worth mentioning that we consider ourselves forest advocates. We feel like that is very much central to what is Brown County and how that shapes the people who live here.”

There are topics which are taboo on the Brown County Hour. They stay away from religion and just generally avoid proselytizing.
“There are a lot of views that we’d rather not give voice to,” Seastrom said. “We’re not into politics, we’re trying to represent everybody. The thing about us, I believe, is we are inclusive. If you have a story to tell, if you are a member of this community, then that’s fair game.”
The group is very pleased with their latest addition, sound engineer Chuck Wills, who fell in with the Brown County Hour through their previous sound technician Jeff Foster.

“Chuck is bringing us into the 21st century,” said Rick Fettig. “His leadership has really changed everything.”

The engineer is also an IT guy, so he has improved the website and established a podcast on I-tunes, making the show viable in the present-day market.

“Radio is a dead medium,” Seastrom said. “Everything is moving in the podcast direction, that’s the future.”

Wills said the project has reignited his enjoyment of audio production.

“I love putting the show together,” he said. “Coming into this, it all seems very collaborative. We just need to keep doing what we’re doing and always try to do it better,” Wills said. “Because we’ve got a great show.”

Wills said the group has had great success recording live music in the studio, which has led to a new sister podcast, called “Woodshed Sessions,” three song mini-sessions featuring local musicians.
A collaboration is in the works with the Nashville Arts and Entertainment Commission to stage story slams once a month and generate a sister podcast.

“I sincerely hope that the show keeps going on,” said Seastrom. “Brown County will always have the stories.”

You can hear every previous episode of The Brown County Hour at their website, at <www.browncountyhour.com> or listen on WFHB radio at 100.7, 106.3 or 91.3 FM on your radio dial.