Even knitters who claim to own more yarn than Nashville’s “lovely little yarn shop” can’t walk away from The Clay Purl without at least a skein or two in hand.

They carry silky sock yarn, fluffy Alaskan yarn, yarn that stripes all by itself, hand-painted yarn, and more Hoosier yarns than one can count.

“We are a tourist community, and visitors are always looking for something really special to remind them of their time in Brown County,” said owner Michele Hayes. “What I didn’t expect is that, to the local community, knitting shops are so much more than where you go to buy yarn.”

The Clay Purl opened in 2011 in Antique Alley, offering a wide variety of fiber art supplies, craft kits, pottery, shawl pins, spinning wheels for visitors to try, and an assortment of unique gifts. After moving for a few years to a building near the courthouse, Hayes and her yarn stash returned to the alley in 2018. She feels at home.

That’s important to the Valparaiso native.

Hayes and her pastor and church-consultant husband, David, spent their honeymoon in Nashville and later inherited her parents’ Brown County cabin. “I’ve always loved it here,” she said. “It’s always felt like home.” The couple moved to town in the late ’80s but left in 1992 to serve as missionaries in Ukraine after the fall of the Soviet Union. Those were hard years—waiting in long lines to buy bread and unable to purchase green vegetables all winter. Family health needs returned them to the U.S., but their support for Ukraine never ceased. The couple still returns to help new churches launch or existing churches to update their operations. 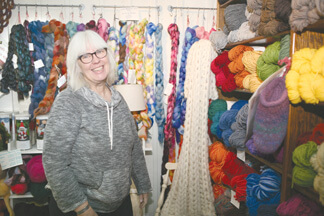 Hayes often lends her marketing and graphics expertise on those trips. She studied business administration, marketing, and German at Olivet Nazarene University and has worked as an art teacher, office manager, marketing director, and graphics designer.

Laughing, Hayes said she planned to depart early from this winter’s trip to Ukraine to be back in time for central-Indiana’s annual Roving Indiana “yarn crawl.” From March 1 to 10, The Clay Purl and nine other yarn stores will delight fiber artists by selling special-edition yarn, and each store will exhibit their own project using the yarn that customers can copy. This year’s yarn was inspired by a painting entitled “Iris Garden” by nationally-renowned artist Jim Gray, who is currently retired and living in Nashville. Hayes said she anticipates this year’s special-edition yarn to be wildly popular because of its vivid blues and purples. The yarn crawl also entices participants with store discounts and prizes. For more information, visit .

Hayes said when she helped launch the annual yarn crawl in 2014, she had no idea what to expect. She was stunned by the line of customers that filled her shop and wound outside her door all day. That kind of success is proof, she said, that there is still demand for brick-and-mortar yarn shops in the midst of an economy moving so heavily toward online sales.

Like many fiber artists, Columbus resident Susan Shaw said she prefers to buy yarn she can feel before purchasing. “I’ve ordered some online and been very disappointed with the purchase,” Shaw said. The avid knitter said she’s thankful for the “great selection,” knowledge, and friendliness she always knows she will find at the Clay Purl.

Hayes is honest that she didn’t really know what to expect when she opened a yarn shop. Her mother was an avid crocheter, and Hayes learned to knit when she was 10. But her hands didn’t pick up many needles again until a group of co-workers began knitting over their lunch hour about 15 years ago. She laughs that her first attempt at knitting socks resulted in a foot she’d crafted inside-out. “When I started talking to my husband about doing a shop in Nashville, honestly I didn’t know what it would be,” Hayes said. “When I started thinking about a yarn shop, there was just something about the colors and textures that I loved. And now, it’s so much more fun than just going to work.”

Hayes said she never expected to thank the local community, rather than tourists, for the bulk of her sales.

The store hosts a weekly knit night on Tuesdays, and Hayes said she’s watched a family of artists emerge. “We’ve become the place where new knitters in town come to make friends. Where young girls, or knitters in their ‘80s, can just come laugh and talk,” Hayes said. “It’s been wonderful to watch that become the true spirit of this place.”

For more information about the Clay Purl, visit <claypurl.com>, or stop and see them at 92 West Franklin Street.