Gabriel and Jamie Lehman at this year’s Indiana Artisans show in Indianapolis.

~story and photo by Bob Gustin

One recent autumn day, Gabriel Lehman walked outside his rural Brown County home and looked up to enjoy the big blue sky. He noticed the details around him, like the plentiful nut harvest, and the squirrels making great leaps from treetop to treetop. Then he thought, “What if squirrels could really fly, and could be harnessed and saddled and taken for a trip?” In Gabriel’s world, that’s possible.

Even as a boy, playing in the woods and farmland near Elkhart, picking apples, fishing in the creek and running with a herd of friends, his artistic imagination ran wild.

“I liked paper airplanes, of course,” he said. “But I wanted to ride in them. Who wouldn’t?”

Now 42 and an illustrative surrealist of note, Lehman has made Brown County his home as he celebrates 10 years of painting. He and his wife Jamie live at Cordry-Sweetwater Lake, where he paints his colorful fanciful portraits of a world of his own creation. 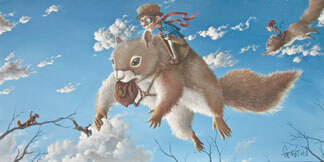 Traveling through the Treetops

Gabriel’s world has its own rules. Gravity works just like it does on earth. The color palette is limited. But there’s no electricity, no internal combustion engines, and modes of transportation are powered by nature, animals, people and their creations. Size is relative. Characters include Gabriel, Jamie, and his son Connor, a student at Brown County High School. In Gabriel’s world, Jamie is a little girl who wants to explore, but her parents want her to be proper, like a ballerina. She has a patchwork elephant which is sometimes big enough to ride away on, sometimes small if it needs to hide.

His favorite artists are Rene Magritte and Dr. Seuss, and influences of both can be seen in Gabriel’s work, usually acrylic on canvas. A childhood portion of Looney Tunes is also apparent.
“I want to celebrate the joviality and innocence and sense of wonder children have,” he said. 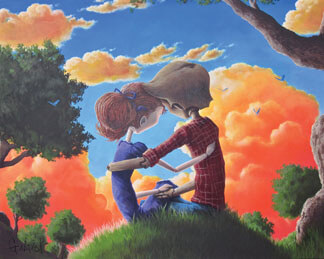 The Lehmans came to Brown County about two years ago from the Greenwood area, where Gabriel worked construction and installed carpets.

Examining his life, he thought hard about what his purpose and his passions were.

“I couldn’t say carpet was it,” he said. But his carpet career was not without its positives. Gabriel said the work helped hone his attention to detail and sense of precision.

Gabriel and Jamie chose to live in Brown County because both are outdoorsy people, and they were searching for a place they could be happy and spend the rest of their days. An art studio is in their long-term plans.

Gabriel said he was a poor student in high school, with a C- being reason to celebrate because of his conceptual dyslexia, which left him unable to understand what he was reading. But an art teacher reassured him that everyone has their own special kind of intelligence.

Before meeting Jamie, Gabriel was a singer-songwriter living in the Wilmington, North Carolina area, where he slept in his car and bathed in the ocean, selling paintings for $50 each from the back of his car. Then a friend he calls Mr. Mark let him stay in his studio in return for help around the house, and his art career got serious, selling out art shows in restaurants and finally having his first museum show in late 2010.

He estimates he has done 3,000 paintings in the past ten years, usually working on five or ten at any one time. And though prices for his originals have gone up over the years, prints of his work are also available. He has no formal art training, but he walks through the world with his eyes wide open, seeing the shadows and the light and the details of the things around him.

He met Jamie at an art show in September 2014 and she asked him if he’d like to illustrate her poetry. He declined at first because of his dyslexia. She persisted, and finally sent her work to him.

“I realized I had already done it,” he said after reading her work. “She wrote about my childhood, and she has the same mind as myself.”
They had a meeting, then a date, and were married shortly after that.
Together, they did children’s books titled “Splat” and “Kitty Calamity.”
His website sums up his approach to art and life like this: “Gabriel is a humanitarian by nature and uses his gifts to enhance the lives of people across the country. From donating paintings to charity auctions to muraling homeless shelters and church nurseries, if he can help, he will. He sees the light all around him and brings this light into his work and, in turn, into the hearts of those who view it.”

As a surrealist in an area known for its impressionist paintings,
Gabriel feels right at home.

“I might be the oddball out,” he said. “But the sense of celebration in their work is also in mine. We celebrate life.

“I’m just very, very blessed I get to do what I do and where I do it.”
Gabriel’s work is available at B3 Gallery in Nashville. For more information, visit <gabriellehman.com> or email him at <artbygabriellehman@gmail.com>.