Comaraderie, food, and adventure with a timeless country flavor, can be found in Gatesville, just ten miles from downtown Nashville, or seven miles from Route 46. By pedaling you can get there in an hour, much sooner in the family car.

Gatesville, an unincorporated community in Hamblen Township is east of Bean Blossom. A mile north of Gatesville on the Sweetwater Trail is a small monument to honor the township’s namesake, Job Hamblen. He was a Revolutionary War veteran who eventually homesteaded in the area. After serving in Yorktown, Hamblen and his wife traveled the route of so many frontier settlers through West Virginia and then Kentucky. They landed in the far western edge of Bartholomew County in 1825 where they put down roots. In 1836 when the new Brown County came into existence, Hamblen’s son, Eliakim, suggested that the northeast section forming the new township be named for his father, its first settler. The only post office that served Gatesville operated from 1855 until 1903 and was called Cleona. 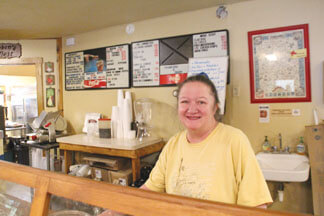 The hub of the community today, the Gatesville Country Store, is located at 4525 Salt Creek Road. The store carries the expected staples of the all-American neighborhood grocery, plus hats, gloves, candy bars, chips, and ice cream. It also has freshly made deli items and a restaurant. There are daily specials on the menu. The Saturday and Sunday breakfast buffet is a welcome hug-to-the-tongue-and-tummy with scratch-made home cooking. Biscuits and gravy and hash brown casserole that were served at everybody’s grandma’s table are big favorites. Robin Stevens has been proprietor since 2001. She prepares the deli salads, daily specials, as well as handling the business details of the restaurant, such as ordering and bookkeeping. Robin loves her regular breakfast and lunch customers who are the construction crews, road workers, and residents and workers from the nearby lakes. Husband Doug is now retired and is a right-hand helper at the Gatesville Store. Their son, Jared, is grown and lives in Cordry Lake. He is married to Amber, works at Sub-Surface of Indiana, and is the father of five-year-old James. 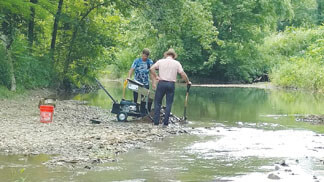 Gold Prospectors Association of America members at the creek in Gatesville.

Summer weekends bring vacationers, with youngsters being amazed at the monster display of Robin’s rock collection. Majoring in geology at Indiana University, Robin is the ready expert to identify fossils and rocks that are presented to her. A section of the store is devoted to the sale of gold prospecting: specialty tools, supplies, and books.
The Southern Indiana Chapter of The Gold Prospectors Association of America meets on the second Saturday of each month at 1 o’clock at the shelter house. Local history has fingered it as the ideal location. A gold mine was once in operation on Gold Point Road, less than a mile north of the store. Glacial gold, the tiny glittery specks, was deposited during the ice age, along with bits of gems and minerals amidst monstrous rock mounds. Robin has samples of findings in Salt Creek: copper nuggets, silver, platinum, and even diamond.

The prospectors are having a special outing on June 15 and 16. Registration will begin at 9 a.m. on Saturday and 10 a.m. on Sunday. There will be a raffle at 5 p.m. Organizers expect an attendance of 60–75, with folks coming and going throughout the day. There will be ample seasoned prospectors to demonstrate and talk individually to prospecting newbies and the curious. Loaner panning supplies will be available and “high bank” equipment will be set up.

The group is versed in current state laws governing prospecting. Rules include: times of day allowed for prospecting; use of non-motorized equipment, such as pan, sluice box, or pick and shovel; no mercury or other chemicals used to assist with the recovery of hard mineral resources; no mussels are taken; and no endangered species are taken.

Rich Luellen, a Hoosier who was investigating metal detecting after retiring, was bitten by the gold bug when he ran across a magazine on gold prospecting. He speaks warmly of the “gold found in people,” the open-hearted sharing in the prospecting community.

Jeffery Behnke states he was introduced to gold prospecting when he was six years old. The hobby is part of his own young family today.
Interested people can get information on when the group meets by emailing <eutserlack@comcast.net> or by messaging their Facebook page. Queries will receive quick replies. Expanded details regarding the June gathering as well as gold prospecting activities in Indiana are available at the website <indianagoldprospectors.org>.