Bean Blossom’s annual John Hartford Memorial Festival touts itself as “The Most Laid Back Festival in America.” It might be laid back, but it also features a fast-moving line-up of some of the most talented bands in the country.

“We definitely have a very loyal core crowd that comes back every year,” said event organizer Tom Burkhart. “It’s almost like coming back to your family.” 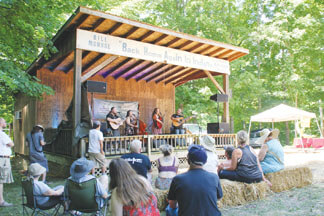 Local group Bluegill in the Slaw at the Hippy Hill stage during the 2018 festival.

Burkhart said countless lifelong relationships have started at the festival.

“We’ve had proposals and even weddings at the festival,” he said. “A lot of people say the festival has changed their life. People really like the beautiful, historic venue, the vibe and being around other like-minded people—and listening to outstanding music.”

While it is hard to pick a favorite, Burkhart said he is “super excited” to see Laurie Lewis & the Right Hands perform.

Led by Grammy Award-winning musician Laurie Lewis, the band’s latest album was nominated for the Best Bluegrass Recording Grammy in 2017.

“Laurie Lewis is a west coast bluegrass phenomenon and this is the first time she has been in this area for a long time,” Burkhart said.
Another band making a first time appearance at the festival will be JigJam, a multi-award winning quartet from the heart of the midlands in Ireland. 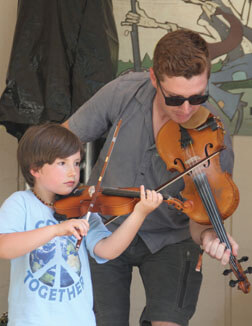 Blending the best of traditional Irish music with Bluegrass and Americana in a new genre which has been branded as ‘I-Grass’ (Irish influenced Bluegrass), their onstage energy, along with their virtuosic musical ability, has captivated audiences throughout the world.
“They really are up and coming,” Burkhart said. “That’s the great thing about this festival. You can come and see your favorite performers or maybe your new favorite performers you have never heard of.”

Among numerous festival performers, attendees will see Sam Bush, Tim O’Brien Band, Della Mae, Vince Herman, Great American Taxi, Larry Keel Experience, and the Rumpke Mountain Boys.
Burkhart said one of the things he likes most about the festival is that it is small enough that attendees can get close to every performance and not feel lost in the crowd.

“We cap attendance because we always want you to be able to walk up to the stage without fighting a giant crowd. At some festivals, it’s tough to even see who is playing,” he said. “Here you might even walk up to the band and talk to the performers after the show because they are watching the next band.”

The festival features performances on three stages from late morning until late in the night, with round-the-clock campground jams, a songwriting contest and a band contest.

“Our unique festival maintains a genre busting line-up like no other festival with a list of performers whose music is varied, different, fresh and original, and rooted in the Spirit of John Hartford,” Burkhart said. “This year’s lineup is diverse and speckled with musicians who have direct connections to our festival namesake. Our headliners are the folks who include the legends and those who are making the biggest waves across the vast ocean of music that we call Americana, Roots, and Bluegrass.”

The festival has featured bands from nearly every state in the United States, and bands from as far away as Canada, Brazil, and Australia.
Burkhart said he thinks the festival’s namesake, John Hartford would be proud of the festival.

Dubbed the Father of Newgrass, Hartford was a bassy-voiced, dancing fiddler/banjo picking songwriter, and inadvertent shepherd of the roots music movement.

“In many ways, John Hartford is the Mark Twain of traditional music,” Mick Buck, the Country Music Hall of Fame’s Museum’s curator of collections, has said. “He was a beloved American figure whose influence went far beyond his commercial success. He brought literacy, humor, and inventiveness to his music and an eclectic sense of adventure to his life. He was a true artist in every sense of the word.”

A mentor for a generation of bluegrass players, Hartford died in 2001 at the age of 63 after a two-decade long battle with non-Hodgkin’s lymphoma.

“I do not believe John Hartford set out to carve a legacy. I believe John Hartford was one of the rare ones. Hartford started something by doing things his way,” said John Hotze, festival founder and childhood friend of Hartford. “His music consisted of deep serious lyrics that would burst into whimsy or vice versa. Just when you started to take him seriously, he would break into some falsetto just to have fun, or just when you thought he was all about having fun, he’d make you sit up straight and bring tears or deep contemplation with a heartfelt original.”

Burkhart said he and Hotze work hard to bring the best performers and create the best atmosphere each year. The work can be exhausting, but keeping Hartford’s legacy alive inspires them to keep going.

“Much of our motivation comes straight from a line in the John Hartford song, “Josephs Dream.” “Just when you think it can’t get no better then it does,” he said.