For many who visit or live here, Brown County’s appeal lies in our honoring of the past. Others are focused on the future, looking forward to the ways innovation sustains our quality of life as we find our place as a community in an ever-changing world. Either way, we agree on one thing: the bedrock of Brown County—past, present, and future—is our longstanding support of the arts.

When the Little Nashville Opry burned down in 2009, the local arts scene lost a treasure that hosted country music’s biggest names for over three decades. And thanks to the vision and persistence of members of the community and local government, year-round, big-name entertainment is back in Nashville this August, when the 2,000 seat Brown County Music Center opens its doors at 200 Maple Leaf Boulevard.

“As soon as the Opry burned, [local architect and musician] Doug Harden started making drawings for a new place,” remembers Jim Schultz, Vice President of the Brown County Redevelopment Commission and Chair of the new facility’s Construction Committee. After almost ten years, thousands of volunteer hours, and the securing of a $12 million-plus loan for the project, Jim says, ground on the new site was broken last summer, and the Center is on track to open in time for country music star Vince Gill’s performance at its inaugural concert August 24.

To make the deadline, everything’s full steam ahead at the construction site just east of downtown Nashville. The walls of the poured concrete and block structure are up, as is the steel girding that will support the Center’s 50,000 pounds of lighting. But, says Jim, it’s the venue’s acoustics that’s guided most of the design decisions on the project. 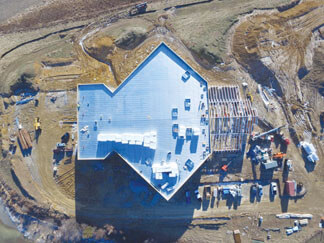 “We consulted with Steven Durr, a world-renowned facility designer, to be sure everything would be right,” he explains. “He told us that the two keys to attracting top-notch performers are great sound and great accommodations.” So even before settling on a building design, the project’s vetting group set out to find a spot that would wow performers and audiences alike. The property they chose, Jim says, overlooks a beautiful view of Salt Creek and offers plenty of parking for tour buses as well as fans.

“Lots of times, musical acts pull into a venue, and they’re parked in an alley, in the middle of a congested city, in all the hustle and bustle,” he says. “We’ll have full hookups for their buses, a fenced area for them to relax, and great dressing rooms. We want them to remember Brown County as a great destination to play.”

As for the acoustics: “We’ve had industry people in looking at our plans, looking at the building, and they’re impressed,” says Jim. “There’s going to be wooden fixtures that trap the bass frequencies that can drown out the music, and there will be reflectors up above the crowd that bounce the higher frequencies back down. There won’t be a bad seat in the house.”

The acts the Music Center books, which as of press time include Vince Gill, Tesla, George Thorogood, Here Come the Mummies, and Peppa Pig, represent a wide range of genres and performance experiences. They’ll be expertly illuminated onstage thanks to Bandit Lites, another industry leader for venues of the Music Center’s size.
Although the journey to getting the Music Center up and running has seen its share of challenges, Jim attributes the overall success of the project to the relationships forged long ago by its various partners and volunteers. “It’s a trust network,” he says. 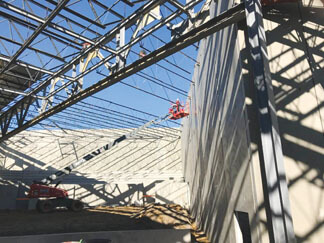 Between the big-name draws and the stunning sights and sounds of the venue itself, the County is confident that the Music Center will have no problem paying off its construction loan with ticket sales, Jim explains. After that, ownership of the facility will be transferred to Brown County, and the Music Center’s success will directly benefit the community. “Under the formula we’ve worked out, 25 percent of revenues will go to the county’s general fund, and 75 percent will be distributed as grants to local nonprofits and local government. This allows us to use the Center as a sustainable investment that can fund projects that things like the local innkeeper’s tax and local income taxes can’t.”

In addition to the national acts already booked, Jim says, over 30 others have indicated interest in coming to the Music Center. Local organizations and non-musical performances will also fill the venue’s calendar, which will be announced as dates are filled.

Contact the Brown County Music Center for more information or to volunteer at <browncountymusiccenter.com>, or through the Facebook page. Tickets will be available at the Brown County Visitors Center 211 South Van Buren Street, Nashville (812) 988-5323 or online at <ticketmaster.com>.