Skip to content
Life is Good at JB Goods

Life is Good at JB Goods

Jake and Josh Patrick look forward to Brown County’s busy season every year. This year, however, has been the most challenging season yet. Their father and business partner, Mike Patrick, died in May and this is their first busy season without him.
“I knew it was going to be hard, but it’s even harder than I expected,” Jake said. “Not only do we miss him, but a lot of people don’t know that he passed away, so we end up telling the story multiple times a day and reliving that pain.”
In addition to the grief, the workload has increased significantly for the two brothers who own and operate the two J.B. Goods Life is Good stores in Nashville, along with two employees.
“We are wearing a lot of hats these days,” Josh said. “But dad taught us a lot and we hope to continue his legacy.”
The most important thing their dad taught them, Josh said, was about work ethic.
“He worked hard and taught us to work hard too,” he said. “He also taught us how to have fun with the customers and help them find what they need. He really was retail magic.”
Mike also served for many years as a board member and a leader of the Brown County Convention and Visitors Bureau, initiating some significant changes in advertising and visitor services.
Jake, Josh, and their dad opened their first Nashville business in 2000. It was an outdoor retail store called Hilltop Hiking Company. They sold Life is Good merchandise, along with several other product lines.
“Life is Good was our best selling line,” Jake said. “And we really liked the outdoor focus and the simplicity and positive messages the company featured on the products.” 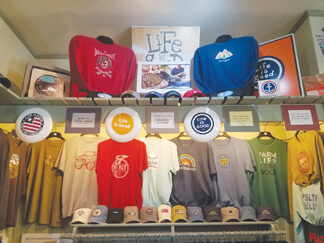 Soon after opening Hilltop Hiking Company, the three approached Life is Good owners Bert and John Jacobs about opening a store exclusively devoted to Life is Good products. When the store opened in September of 2001, it was the very first and only Life is Good retail store in the country.
Not long after opening that store, the Patricks decided to open a second store devoted to Life is Good children’s products – it was also the first and only of its kind in the nation. They also opened an online retail store before Life is Goods and handled a majority of all national online sales.
“Business really took off,” Jake said. “People really liked the simple designs with words and images that just make you smile.”
Today, nearly two decades after opening the stores, Josh and Jake still love what they do. And while the simple and positive message of the company remain the same, the Life is Good product line has grown significantly.
“The 2001 catalog was 25 pages. The most recent catalog was 125 pages,” Josh said. “We sell 90 percent of the items in the catalog. One of the things I like most is trying to fit all of the items into these two stores.”
Jake said he likes the entrepreneurial aspect of the business.
“I like that we are in control of our own destinies,” he said. “I also like being a part of our customer’s lives. People come back every year to see us. We have seen numerous generations of families come through. It is fun to see families who come back each year and really enjoy the products.”
The messages and images on the products also play into Jake’s personal interest in the outdoors.
“As kids we spent a lot of time in Brown County hiking and mountain biking,” Jake said. “The Life is Good people are so creative and really good at coming up with great products.”
Along with t-shirts (the most popular product) the store also sells hats, mugs, pajamas, Frisbees and more.
The brothers said picking a favorite Life is Good quote is hard because they are all so great, but Jake really likes “Hike more, worry less,” and Josh likes “Music is what color sounds like.”
The two J.B. Goods stores are located at 172 North Van Buren Street and 102 South Van Buren Street. They are open from 10 a.m. to 5 p.m., seven days a week. You can learn more by visiting their website,<jbgoods.com>.