The Goat Conspiracy formed about five years ago when two Bloomington couples decided they were ready for a change in careers and lifestyles. The co-conspirators were looking for sustainability, a slower and simpler pace of life, getting in touch with where food really comes from, and the notion of getting back to the earth.
They found it on 46 acres at 6022 East Kent Road in Brown County, near the T.C. Steele home, which now features about 130 Nigerian dwarf goats, a cheese processing center, free-range chickens, and a vacation rental home.
Tonya Plachy and Josh Jackson were both working at Bloomingfoods in Bloomington and Nicole Schonemann was their neighbor. The fourth person in the conspiracy is Nicole’s partner, Mark Veldman. They’ve been joined by the children of Josh and Tonya, Bear, age three, and Lynx, who is four months old.
But perhaps the most important members of the conspiracy are the goats themselves, and the human partners joke that sometimes it’s hard to tell which species is really in charge.
“The conspiracy is that we all work for the goats,” Tonya said.
Learning to be goat farmers was not easy. The co-conspirators were primarily self-taught from how-to books and workshops. Other local farmers also provided some schooling.
Josh said some of the education was problem solving, which sometimes involved trial and error, with help from Google and YouTube.
The Goat Conspiracy sells goat cheese, of course. And goat milk soap. But they also offer goat yoga, goat landscaping, and loan out their goats for social events such as birthday parties and library celebrations.
“They’re very efficient little creatures,” Tonya said.
Just like people, goats all have different personalities, she said. Some like to stay in their family groups, some are especially friendly towards humans, while others are stand-offish. Some are dog-like and some have personalities more like cats. 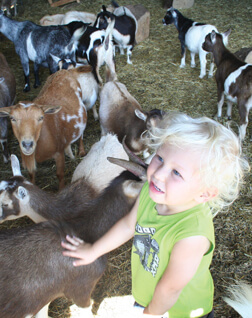 Bear Jackson frolics with some of his favorite goats. photo by Bob Gustin

The conspiracy works because the humans all have their individual strengths, share the workload, and have found support from the community and friends. Mark is the businessman and handles their booth at the Bloomington Farmers Market. Josh is a goat herder, handyman, and does farm maintenance. Tonya is the “goat whisperer,” milker, and goat midwife. Nicole makes the cheese and soap, and manages the vacation rental cabin.
Josh explained that goat landscaping involves renting out some of the goats to clean an overgrown property of unwanted weeds. The area is defined by an electric fence, then goats are let loose. He said goats especially love invasive plants like honeysuckle, poison ivy, multiflora rose bushes, and woody stalks.
Things come full circle when goat manure is used to fertilize the soil and help crops or lawns grow.
Second-year goats are the landscapers, and young goats are used for in yoga classes. Nicole said the animals can be therapeutic when they interact with people, bringing a peaceful feeling.
“It’s good for the goats too,” Tonya said. “We take care of the goats and the goats take care of us.” 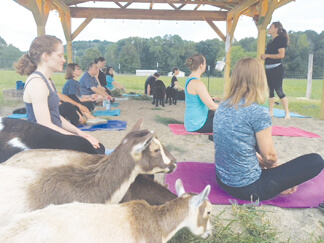 Their website offers a succinct explanation of why they do what they do:

The Goat Conspiracy also offers a rent-a-buck service, and sell goats for pets and as 4-H projects, or to hobby farmers. Some of the older goats are sold to processors for meat. And in January, people can bring their untreated Christmas trees to an event where the goats eat the old trees and the people enjoy the spectacle. Dozens of free-range chickens provide fresh farm eggs.
Open houses are held every couple of months at the Goat Conspiracy and people who have registered can tour the farm and facilities.
Another feature on the farm is an impressive log cabin which is a tourist rental. It has a large front porch and custom interior with three bedrooms, three bathrooms, and can accommodate eight guests.
More information: The Goat Conspiracy, 6022 E. Kent Road, Bloomington, IN 47401, (812) 322-2879,
goatconspiracy@gmail.com.