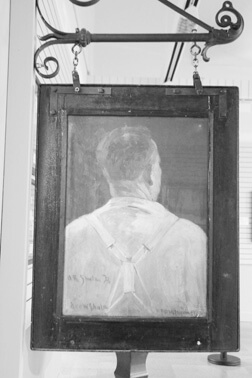 All Sides of Bill Pittman

In the early 1950s Pearl Fushelberger of Columbus, Indiana, enjoyed her grandchildren, Steve and Beth in her home. The children often tried to move a heavy picture in the family den during their play. Quite a challenge for the little people, it was painted in oils on a solid oak door removed from the kitchen of the Pittman Inn in Nashville and framed and hung in hand-tooled ironwork. They referred to the portrait as “the picture of the funny man.” Years later Beth would confide to her brother that she was always afraid of that picture of the old man, and to a three-year old little girl the picture itself was as tall as she was. That “funny man” was their great-grandfather, William Pittman.
Bill Pittman was born on October 13, 1869 in Monroe County, Ohio. His family moved to a farm about six miles east of Nashville, Indiana, where he grew up. He became a pillar of Brown County society as an adult, serving as county clerk for eight years and three months. His bride in 1878 was birthright Brown Countian, Amanda Kirts.
In 1907 Bill bought the Sanitarium, a building put up in Nashville in 1890 by Perry Hannah to specialize in mineral water treatments that were touted at that time. Bill converted it to the Pittman Inn, a hotel with twenty-five sleeping rooms, and six bathrooms—four for men and two for women.

Bill and Amanda became the hosts to all the artists who came to paint in Brown County as part of the Art Colony. Arriving at Helmsburg via the newly-built Illinois Central Railroad from Chicago and beyond, guests were sometimes greeted by music of the village band, arranged for by Bill Pittman. No paved roads existed at this time in Brown County, but visitors could walk the six or seven miles to Nashville or join Bill Pittman on his horse-drawn surrey. If the Inn was filled to capacity, Bill secured rooms in boarding houses around Nashville for guests. His generous sense of hospitality and jovial disposition drew the painters to Bill’s Inn for meetings, discussion, and fellowship. 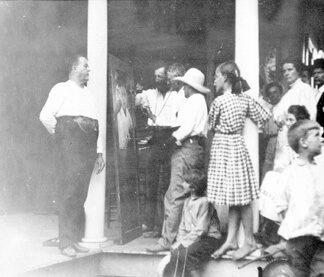 Pearl Pittman Fushelberger, known as “Miss Pearl” to the artists, hands down the story of how Bill Pittman’s portrait was painted by multiple artists, including T. C. Steele, on a rainy spring day in 1908. Due to the weather, the artists could not go out to set up their easels and were congregating at the Pittman Inn. Joking with Bill, comments were made about his Inn lacking a sign. His retort: “If you don’t like it, paint me a sign.”

Bill was immediately posed upon a stool on the front porch. Miss Pearl relates how the kitchen door was removed and used as a canvas. Seven of the artists painted the likeness of Bill, suspenders and all, with his jovial smile. Seven other painters staying at the Inn at that time turned Bill around and painted his back on the other side of the door. Fred Hetherington, part of the Hetherington-Berner Works of Indianapolis, had the door-portrait sawed to size. It was then taken to Indianapolis and had glass protection added to both front and back. A heavy iron frame and brackets from the local blacksmith completed the new sign. It was hung on a post in front of the Pittman Inn. 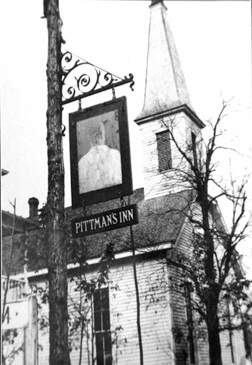 This hotel was sold to Billy Musselman. When the Pittman family moved to the southeast corner of Main and Van Buren Street and operated a second Pittman Inn, the portrait-sign went with them. The family business continued for eight more years.

Weather-beaten at the time the Inn was torn down fifteen years later, Will Vawter, who had lent his brush to the original picture, touched up the damage. Unfortunately, most of the artists’ names were covered up during this restoration. Artists known for their part in the piece are: T.C. Steele, Adolph R. Schulz, Ada Walter Schulz, John Hofen, L.O. Griffith, Lucia Hartrath, Will Vawter, Mary M. Vawter, Frank Albright, Harry Engle, Wilson Irvine, Charles W. Dahlgreen, Adam Emory Albright, and Fred Hetherington.

When Miss Pearl married Peter Joseph (P.J.) Fushelberger, their wedding gifts included artworks from the Brown County artists—pieces by Gustave Baumann, Ada Walter Schultz, and a pencil sketch by L. O. Griffith of Bill Pittman’s wife and Miss Pearl’s mother. Amanda, P.J., and Miss Pearl met each other when he came to work in Brown County as an educator. He served as a teacher, principal, and the first superintendent of Brown County Schools. P.J. and Pearl Fushelberger later lived in Hayden for a short time, then made their home in Columbus for the rest of their lives, where P.J. was a realtor and landlord.

Bill Pittman died on May 13, 1923 and is buried in the Henderson Cemetery, located east of Gnaw Bone. His abiding wife, Amanda, died on November 5 a year later and rests beside Bill.

Miss Pearl graciously gave the unique “front and back” painting-sign of her father to the Brown County Art Gallery in 1968. Visitors coming to the Brown County Art Gallery can easily find it in the permanent collection. There are Frank Hohenberger photographs, including one of the painting when it was being made by the artists. There is also as an actual hotel register book from the Pittman Inn which bears signatures of many artists. The impressionists that immortalized Brown County’s natural landscape in the first part of the twentieth century collectively represented Brown County’s human soul in the likeness of Bill Pittman.

Many thanks to Steve Fushelberger, great-grandson of Bill and Amanda Pittman, for his input and enthusiasm.