The way Beverly (or B) Skinner sees it, there’s a little love affair going on in each of her fused glass creations, be they little bluebirds on a branch, presents under a Christmas tree, a flower garden in bloom, or one of the many other scenes.

And you can add another element to the story. B loves creating with glass.

”Playing with my grandkids: That’s the only thing that’s better,” she said.

Though she has exhibited in Brown County for years now, she set up residence here only a few months ago, moving from Battle Ground, Indiana, in the Lafayette area.

She grew up in Indianapolis, the daughter of a signmaker, and attended Ben Davis High School, where she studied metalsmithing and auto mechanics, among other things, always making things with her hands.

After high school, she worked in retail settings until she met and married Bill Skinner, a potter. They moved to Kansas City, Missouri, then to Baraboo, Wisconsin, where they both worked on handmade pottery. He built the pots and B did glaze formulations and fired kilns.
“It introduced me to the chemistry behind glass,” she said.

When Bill died unexpectedly 24 years ago, she was left as a single parent to three children, then aged 9 to 18, and she was working as a service manager at an auto dealership. 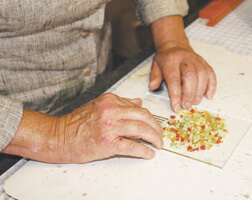 “It was very stressful,” she said, working 60 hours a week and raising a family. To lower the stress levels, she moved to an animal sanctuary farm near Willisburg, Kentucky, where she lived in a yurt off-grid for awhile, taking care of about 180 animals. She then found herself in Madison, Wisconsin, working as a baker at the second-oldest business cooperative in the U.S., Nature’s Baker.
Finally, she found an affordable house in Battle Ground, put lots of work into it, and met Kathleen Kitch of Williamsport, Indiana, who introduced her to fused glass. Shortly thereafter, she started making fused glass on the side, while working, as a receptionist, doing house cleaning, and in retail settings.

Fused glass is a process of joining pieces of glass together at high temperatures, usually in a kiln (B has five). Cut or whole pieces of clear and colored glass can be arranged before firing, turning multiple units of glass into one.

As a 60th birthday present to herself five years ago, she became a self-sustaining glass artist.

Now the next phase of her journey begins as she settles into a rural home and studio on Scarce O’ Fat Ridge in western Brown County.
“Heaven sent” is how she describes the 10 acres she is transforming into a home and workspace. She has been looking for about two years in Owen, Lawrence, Green, Brown, and Monroe counties, to be closer to friends and family and market her work.

“There’s lots of support for artists in Brown County,” she said, “something I was not finding up north.”

Like many of the artists here, B finds her inspiration in nature, and she is self-taught, learning by doing.

“I’m a part of nature and it’s a part of me,” she said. Though best known for the hanging glass nature panels she has been making for about nine years, she plans to begin working on glass and metal sculptures that belong in the woods.

“I want to make things that the moss would like to grow on and animals would like to nest in and hunt in,” she said. She sees art as a part of the permaculture, an exchange of energy between people, places, and things.

Her art is available in several retail outlets, including New Leaf in Nashville, and at various arts and crafts shows. She will be a guest artist at Homestead Weaving Studio during the Back Roads of Brown County, a self-guided tour of studios in rural Brown County, which runs the entire month of October.

“When people walk into my booth at shows, they start smiling,” she said. “It’s a really powerful thing. I like knowing what I make is having a positive impact. We can all use a little smile,” she said.