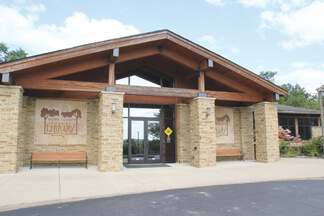 The Brown County Public Library has been housed in many different buildings over the past 100 years, but one thing has remained constant—a series of determined and visionary women who have led the library from the start and advanced it at every turn.

The original legislation that carved Brown County out of parts of Monroe and Bartholomew counties in 1836 provided a funding mechanism for a public library. One was established by 1840.

After the initial timber boom was over, most of the people left, and the county fell on hard times. Somewhere along the way, that first library dissolved.

The foundation of a new library, the one we are celebrating this year, was spurred by the arrival in Nashville of a determined, independent and accomplished woman, its first librarian, Helen Allison.

Mrs. Allison was a union typesetter operator and had also written for newspapers in Columbus, Vevay, and Elwood. She married George A. Allison, the son of Alonzo Allison and grandson of Captain George W. Allison, early newspaper publishers in Nashville.

Around 1919, Mrs. Allison became interested in establishing a new public library in Brown County, took library training in Indianapolis, and helped to organize a board of trustees in December of that year. In March of 1920, she was selected as the new librarian at a salary of two dollars per week.

The first library was located in a small brick building on Main Street, rented from T.D. Calvin for 98 cents per month. The trustees were already looking for an empty lot in town on which to build a library.
Mrs. Allison led a push for public support of the new library and in September of 1920, a county tax was levied to support a public library in Brown County.

Because of bad roads and general poverty, a lot of Brown Countians couldn’t make use of the library in Nashville. Mrs. Allison decided to send some of the books to outlying areas of the county, sometimes to private homes, so that more of the public would have better access to them.

In October of 1921, the library moved to what is now the Village Green building on West Main Street. Rent was $10 per month. Mrs. Allison’s salary was raised to $50 per month.

In the late 1940s, Ralph and Mabel Calvin Burkholder donated a new building to the library board. In December of 1949, the library moved into the new building on the southeast corner of the Village Green, across from the Nashville Methodist Church.

Illness forced Mrs. Allison to retire in 1952. Her successor, Edna Frazier, was an experienced librarian from the small northern Indiana community of Bluffton who had moved to Nashville in 1941.

For the next 40 years, Mrs. Frazier would be a friendly, pleasant, and helpful fixture at the library, overseeing the expansion of its collection and serving residents with dedication and understanding.

In the 1950s, Mrs. Frazier developed a summer reading club which helped countless county children by reinforcing their reading skills. At the beginning of each school year, she offered books to each teacher in the county schools to be used and distributed.
She retired in 1982.

In 1983, the library moved to a location that is now the Career Resource Center on East Main Street and got a new librarian, Char Skirvin. She supervised, not only another physical move, but the impact of changing times and technology on the library, with the rising popularity of audiobooks, videos, and other electronic media.
She was succeeded by Ian Engle in 1989, who was replaced by Yvonne Oliger in 1992.

In 2001, Mrs. Oliger oversaw the greatest transition of all, as the library built and moved to an impressive permanent home, the majestic wood and stone structure at 205 Locust Lane.

In 2013, current library director Stori Snyder took the helm.
She says the Centennial Celebration is about a philosophy of sharing. Libraries share what they have and share it with everybody, without exclusions or exceptions.

That currently includes about 70,000 physical items in its collections, and access to electronic technology which increases that number by the hundreds of thousands.

The library has displays of everything from Brown County pottery and the photographs of Frank Hohenberger to paintings by many well-known Brown County artists.

Thanks to a bequest from Onya LaTour, the library provides much needed meeting space and has become a magnet for the community, offering all sorts of beneficial programming.

More than two-thirds of county residents have active library cards.