It’s here! After many months of planning and construction, the Brown County Music Center opened its doors on August 24 with a sold-out show by country legend Vince Gill. A showcase of great music, beautiful design, and state-of-the-art sound and lighting, the new 2,000-seat venue’s inaugural performance was a spectacular kickoff to its premiere season.

If you’re looking for your chance to experience the BCMC for the first time, don’t worry: there’s something for everybody in this fall’s lineup. You’ll recognize many acts—Clint Black, Tanya Tucker, George Thorogood and the Destroyers, and the Oak Ridge Boys—as some of the biggest names in the business. Others, like Hard Day’s Night, the Breakfast Club, and Scott Bradlee’s Postmodern Jukebox, are tribute acts paying homage to the musical greats.

And one of the BCMC’s biggest stars this fall isn’t a person at all—which is just fine by her young fans. Following her runaway success on children’s television around the world, Peppa Pig comes to life in her own stage show, Peppa Pig’s Adventure. The October 16 show at the BCMC, featuring Peppa, Daddy Pig, George, Pedro Pony, Suzy Sheep, and Gerald Giraffe, is expected to be one of the season’s most popular draws.

“This is a brand-new story and live show for fans of Peppa’s,” says Jonathan Shank, the tour’s producer. “We’ve just finished casting the show for the U.S. and have hired the creative team. We are excited to bring Peppa Pig Live to Brown County.” 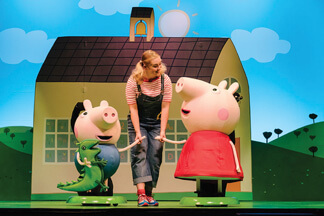 The production also features a twist that sets it apart from other kids’ productions, Shank says. “It uses puppetry in a different way than most other live family shows. The cast are on stage operating the puppets and acting out the voices at the same time. Most children have never seen puppetry done on stage this way before.”

Peppa will be a long way from her home in Great Britain when she visits Indiana, but Gordon Bonham, performing at BCMC October 5, knows our area well. His time in Indiana includes a fifteen-year stretch living in Brown County, and he’s spent the past several years as a staple of the Indianapolis music scene, performing his brand of high-energy, Chicago-meets-Texas guitar blues regularly there.
For Bonham, his spot on the BCMC’s roster is a natural fit. “We’ve got a pretty good blues scene around here,” he says. “I’ve played lots of places like the Pine Room, Brown County Inn, and Bean Blossom Blues Festival for years. Now we’ve got this great new place outside of Nashville, with a bigger capacity. That’s gonna be really cool.” Fans of Bonham’s can expect to hear some of his originals as well as his renditions of old favorites, he says. 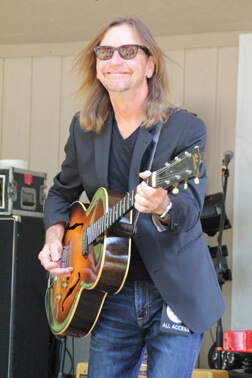 Gordon Bonham will appear with his Blues Band on October 5. photo by Cindy Steele

Bonham partly attributes his success to the universal appeal of the blues. “The blues is the basis of so much American music, like rock and gospel, so it’s not a surprise that it’s persisted this long, across generations. It has the ability to touch people in a really basic way they can relate to.”

Other highlights at the BCMC this fall include Tesla (September 6), Art Garfunkel (September 12), Gordon Lightfoot (September 28), Terri Clark (October 4), and Josh Turner (October 12). When you plan your visit, don’t forget about all the places Brown County offers for eating, shopping, and enjoying the outdoors.

The Brown County Music Center is at 200 Maple Leaf Boulevard outside of Nashville. To learn more about the BCMC, including ticket information, visit <browncounty.com/bcmc> or call (812) 988-5323.