Some things found in Brown County—a waterfall in one of our many parks, lunch at your favorite local spot, the sturdy craftsmanship of our historic buildings—are uncomplicated, direct, and immediate in their appeal. There’s also a lot here that’s subtle and understated in its beauty, like snow seen falling silently onto the boughs of the trees, or the sense of history and tradition that persists here despite our ever-forward march further into the twenty-first century.
And then there’s Nashville abstract artist Bill Bateman. Working out of a private studio downtown, Bateman is neither uncomplicated nor traditional in his approach to his art. Freed from the restrictions of representational painting, he’s driven purely by imagination, and if that puts him out of step with some of his peers, he’s fine with that.
Bateman’s paintings, many featuring interlocking shapes that sprawl across the canvas in vivid colors, are anything but simple and conventional. Where many painters, for example, eschew the use of too many colors in a piece, preferring instead to work within a more limited range of hues and values, for Bateman it’s the more the merrier. Bold colors across the spectrum butt up against each other in his work, with little regard for how they’re “supposed to” fit together (or, it appears, for the cost of paint: like his imagination, his canvases are extra-large).
But there’s a certain subtlety to Bateman’s paintings too, if you take the time to notice what’s going on among the visual chaos of his compositions. A slight three-dimensional quality, for example, is achieved in his rendering of the surfaces and edges of his otherwise flat shapes. Strong through lines, visually rhyming elements, and the careful placement of color unify and stabilize Bateman’s pieces, but also lend them a lively, humming quality. 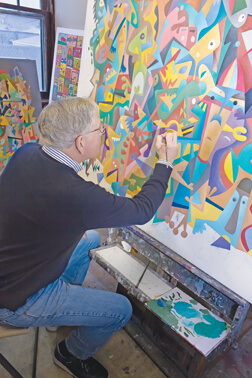 The final piece of the puzzle, for Bateman, is what his audience themselves bring to his work. In the tradition of the surrealists of the twentieth century, he relies on the viewer’s subconscious associations to “complete” his paintings. What we see in a piece, then, has as much to do with our own psychological reactions and individual experience as with Bateman’s intent and execution.
A true artist, Bateman’s always branching out with his new ideas. In addition to his paintings, Bill creates kaleidoscopic works based on photographs he takes. He’ll isolate a small detail in a photo, and then, using graphics software, tile the images as a pattern. The result is beautifully intricate prints that transform the original image into entirely new compositions.
Behind work this lively and expressive, you might expect to find an eccentric, outgoing personality along the lines of Joan Miró or Pablo Picasso, but in person Bateman’s as reserved as his work is colorful and imaginative. His studio, like his outer demeanor, is orderly and quiet, a little island of private introspection among the bustling shops of downtown Nashville. And as for background information, Bateman prefers to keep the spotlight on his work, providing minimal detail about his personal life. Originally from New Jersey, he studied in Colorado and lived in New York City as a professional artist for many years. He followed a friend who moved to Brown County, and here he is. The rest is on canvas.
To learn more about Bill Bateman and his artwork, visit <billbateman-artwork.com>. Gallery visits are by appointment at (929) 213-6300 or <bateman.bill@outlook.com>.