In 1999 Brown County’s Chet Kylander felt the first stirrings to organize a community band. Mel Chance served as the first director, to be followed a year later by Ray Laffin. Ray continued in this role for around 15 years. A non-profit entity to provide board oversight and fundraising was formed under the name of Brown County Music, Incorporated, in 2005.
Today the Brown County Community Band is directed by Shawn Bentz, who sees the band reaching for the sky as it develops its repertoire and musicality. Bentz’s talent and vision for the band springs from his own composition and arrangement of music. He has been a school band director, as well as performing with the Columbus City Band. His musical selections fit the abilities of the members—which vary from first-year high school band to retired professional musicians. It’s a village unto itself of folks who love playing music together. They gather every Thursday evening from 7 to 8:30 at the Brown County High School for rehearsals in a “relaxing environment.” He sees its membership growing in numbers and recognizes increasing enthusiasm for the jazz styles of the 1940s and 50s. There is an interest in forming a smaller group made up of members of the larger concert band to focus on music for a jazz ensemble.
Though Ray Laffin and his wife Judy have made their home in Arizona since the summer of 2015, Laffin is a tender vessel of institutional memory for the Brown County Community Band. He recalls that the band once had four trombone players that were all pastors. Private lessons on various instruments were provided by band members Mel Chance, Verne Sindlinger, Sue Owens, Judy Laffin, Ginny Thompson, and Bob Zack, among others who are remembered and appreciated. Over the years, the Band has played at the 4th of July observance held on a Saturday night at the high school track. Laffin has special recollection of Sheriff Buck Stogsdill organizing a color guard for each of the armed services. As the individual flag for the service was brought forward, the band would play its official anthem. The ceremony would end with the Battle Hymn of the Republic.
A mainstay of multiple Brown County celebrations, many of the current players have been active since its inception. They come with all levels of expertise and experiences.

Phyllis Sindlinger recalls a visit with the Laffins and being recruited when after-dinner conversation revealed that she had been a clarinet player in her high school band 40+ years before. Laffin talked her into letting him get her instrument overhauled. Showing up for practice, she was delighted and amazed that her fingers didn’t forget. She especially loves the interaction and the agelessness of making music with professionals, amateurs, high school and college students, young teens, and retirees. Her friend and fellow clarinet player, Cheryl Owen, have sat next to each other in the band since 2006. With a twinkle and nod, Cheryl says there was one time when Ray separated them because they were “having too much fun.” Cheryl is also known for playing “a pretty mean kazoo.”
French horn player, Steve Shroyer, also plays trumpet and is learning to play alto saxophone. Steve has been playing since he was 8 years old, being taught by his father, who was a high school band director. He played in bands in high school and college, dance bands, and orchestras in Arizona. A semi-pro at this point in his life, he has been playing since 2002 with the Brown County Community Band. Steve encourages anyone who has a musical instrument anywhere in their history to consider joining: “It’s a blast!” 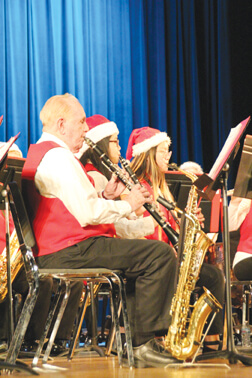 One of the band’s founders, Mel Chance, with high school students Francsca Mata and Nicole Prosch.

President-elect, Bill Schnackel, has been playing trumpet with the band for ten years or so. Though he had not touched his instrument since 1967 and said that facing at least two players in the trumpet section who played professionally intimidating, he soon felt welcomed and part of this musical community.
The Band plays several concerts throughout the year. The anniversary concert is in the fall. The Christmas Concert is a gift to the community. A benefit concert for the local Habit for Humanity is held in May, with the Habitat group providing promotion. Every June a concert is performed for the Sweetwater residents at their beach pavilion.
The Brown County Community Band now has about 35 active players. They play show tunes, marches, classical pieces, jazz, Dixieland and welcome new members who like to produce friendships and music all at the same time.
For more information visit <browncountycommunityband.com> or contact Bill Schnackel at <Schnackelb@yahoo.com> or (765) 490-0789.