Rehearsing for her first high school commencement as Brown County Schools’ superintendent, Dr. Laura Hammack casually asked each soon-to-be graduate about their next step.
She was met with shrugging shoulders.
Blank stares.
Uncertainty.
Upon accepting the job in 2016, Hammack knew she would need to summon a great deal of creativity to provide students with world-class opportunities despite the small, rural district’s daunting poverty statistics, declining enrollment, and budget deficit. But what flew to the top of her priority list was ensuring that every graduate who walked across her stage had an actionable plan for their future.
Hammack beamed, “Because we are small, things can happen pretty fast.”
Walk through the halls of any Brown County school, and it’s evident that the students and staff are like her family. That was never more true than when Hammack, then a sixth-grade teacher at Nashville Elementary, lost her mother when she was fresh out of DePauw University. “I’m forever thankful, and a lot of what I’ve worked for since then has been my way of trying to give back,” she said. The district gave Hammack her first job as principal and later as assistant superintendent. After a short stint as assistant superintendent in the vast Beech Grove City Schools, Hammack said she “jumped at the chance to come back home” to Brown County as superintendent.
Challenges awaited. 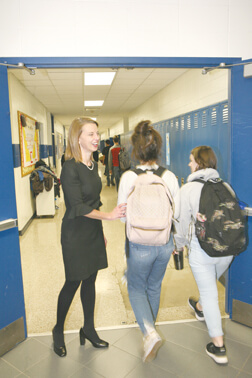 Brown County Schools serves nearly 1,700 students. That’s down about 1,000 students from a decade ago, before the state allowed families to take their tuition dollars to the public, charter, or even online school of their choice. The county’s ability to draw or retain young families is plagued by the lack of affordable housing; shortage of high-quality, affordable child care; and barriers to infrastructure including Internet, water, and building permits, Hammack said. Regardless, that equation meant less funding but the same number of schools to run, she said.
In her time with the district, BCS shaved $2.5 million from a $30 million budget without eliminating teachers but rather by not filling retirees’ positions when possible. Further, the community approved a tax referendum that helped the district give its educators raises and avoid increases to their insurance premiums. A $500,000 Ready Schools grant from the Regional Opportunity Initiatives group in Bloomington allowed BCS to upgrade curriculum, transform classrooms into high-tech innovation centers, visit other small school corporations in search of best practices, and expand high school pathways that allow students to earn educational and industry certifications and training in fields including technology, manufacturing, graphic design, and more.
One such pathway that’s garnering BCS state and national attention is the high school’s recently expanded Eagle Manufacturing Lab, named after the school’s mascot. It’s a student-run business where sophomores through seniors are in charge of everything from sales and billing to producing precise parts on a CNC machine and printing laser-engraved marketing materials for clients that include Duke Energy, Faurecia, and Brown County Music Center. Hammack said the business hoped to return profits to its student employees within five years but fast-forwarded to that point within just two. Chris Townsend, instructor and adviser at Eagle Manufacturing, said the high school’s four-year engineering pathway had enticed a mere 28 students when he arrived five years ago; today’s numbers are closer to 130. “Our students clock in, wear badges, work paid internships over the summer, and will just be ready when it’s time to be out in the real world,” Hammack said.
Preparing Brown County students for life after high school also includes very intentional exposure to job opportunities available in the local region. And while pursuing a 4-year degree is a path an increasing number of local students are choosing, Hammack also is fostering a culture that celebrates post-secondary plans that include 2-year technical degrees, industry certifications, and acceptance into labor unions.
While the county continues to struggle to attract or retain young families, the increasing population of residents age 55 and up is one of the community’s greatest assets, Hammack said. That group is making itself readily available for volunteering within the schools, mentoring students, as well as tackling tough community problems that trickle down into school problems, she said. “Our county and town are working with us so beautifully. There’s a momentum like I’ve never seen. No one is shying away from our issues,” Hammack said. “We’re definitely all in this together.”
Hammack’s excitement and optimism for the district and its students is palpable. Today, she proudly points to successes including the district’s balanced budget, an increasing number of students from surrounding counties who are transferring into Brown County schools, and the fact that graduates now have solid plans that begins the day after commencement.
She describes every day that she gets to fight for her students’ future as a gift. “Of course there have been hard times, and of course there will be hard times ahead,” said Hammack. “But we’re a family. We stick together.”