There’s something comforting about a nice blaze in a fireplace or wood stove on a cold winter’s day. There’s an aesthetic value, to be sure, and a mood-setter. But heating with wood is a renewable source of energy, and an economical one as well.
Dan Johnson, a Van Buren Township resident who owns a construction company, uses wood as the main source of heat in his home and shop. He has an electric furnace, which is used only if he is away from home for extended periods during winter months. Instead, he burns 15 to 20 ricks of hardwood, mainly white oak, each year.
“When that furnace comes on, I picture money going out the chimney,” he said.
For Johnson, the best part of heating with wood is “being part of a community,” a sharing of his time, effort, and wood with others.
He moved to Brown County from Indianapolis in 1994, and right away, Bob Melton and Jim Ogle “Brown Countied me,” he said. “They taught me the Brown County way.”
The Brown County wood heating community works like this: If a tree goes down on the property of someone who doesn’t want to mess with it, the owner calls somebody like Johnson. He comes and cleans it up free of charge, hauling away the wood to be used at his house or sold to others. Both sides benefit, and the community grows by word of mouth. Meanwhile, Johnson benefits from the physical exercise. Jerry Fleetwood of Fleetwood Excavating also uses Johnson to remove trees as part of his jobs.
A rule of thumb, he said, is if the wood is cut, split, and stacked by Easter, it should be ready to use for heating the next fall and winter. Most of Johnson’s woodcutting is done in the winter, and scraps from his woodworking shop provide kindling for starting fires.
He sells about 12 ricks of firewood to neighbors each year, and Johnson said the going rate for dried firewood is about $50 a rick.
Johnson’s wood heating bible is Norwegian Wood: Chopping, Stacking and Drying Wood the Scandinavian Way, by Lars Mytting, which emphasizes stacking techniques that promote air circulation and plenty of sunshine. The book outlines all facets of firewood preparation, and Johnson said the book outlines “a way of life” for using wood as a heat source. 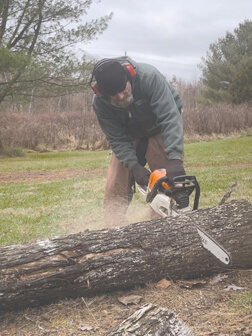 Johnson’s chainsaw of choice is a Stihl, mainly because Bear Hardware in Nashville is a dealer for the saws and a reliable source of repair. And he’s careful to wear the proper safety equipment: Gloves, boots, eye and ear protection, and chainsaw-resistant chaps. The chaps became a necessity after Johnson had an accident and cut his leg with a chainsaw. Now he jokes about it: “I bought me a new pair of chaps. They were kind of expensive, but at least they didn’t cost me an arm and a leg.”
The U.S. Energy Information Administration says about 2.5 million households use wood as the main fuel for home heating, and about 9 million more use it as a secondary heating fuel. That’s about 10 percent of the households nationally. But a higher percent use wood in rural areas than in cities and that percentage increases even more in heavily wooded areas, like Brown County.
According to the Indiana Department of Natural Resources, high-density wood burns longer and has a higher heating value, while low-density wood burns quickly. The heating value of trees commonly found in the state varies greatly. The DNR says Osage orange, dogwood, and hophornbeam trees are the most dense, with highest heating values, followed by hickory, oak, and black locust. Other efficient species include blue beech, birch, hard maple, and mulberry. Among the woods with the lowest heating values are white pine, cottonwood, aspen, basswood, and tulip poplar.
The DNR recommends a combination of high- and low-density woods for heating, which can make fires that are easy to start but burn a long time.
Though heating with wood is a major cause of air pollution in some western cities, wood stoves are more environmentally friendly than they used to be. The DNR says stoves sold after July 1, 1988 must meet EPA standards to reduce pollution, accomplished in part by secondary burning chambers and catalytic combustors.
Proper operation of the stoves is important for both environmental and safety concerns.
Safety rules, including protection of walls, floors, and ceilings; proper ventilation and chimneys; and regular cleanings to prevent fires caused by creosote buildup, are also crucial.
Be careful about quantity when buying firewood. Some firewood is sold by the cord, which is a pile of wood four feet high, four feet wide, and eight feet long. Some is sold by the rick, or face cord, with is four feet tall and eight feet long, but can be of any width. So if the rick is only 16 inches wide, that equals one-third of a cord.
Many experts recommend firewood be stacked to dry for several months before using, depending on its type and its freshness. Firewood should be seasoned until its moisture content is less than 20 percent. Moisture meters to measure this content are available. Wood should ideally be stacked so that air and sunlight can reach it, with a cover of some sort on the top, and positioned outside away from dwellings (which prevents termites from spreading to the house).