In a perfect world, Andi Bartels would sit down with her father as he was in 2000, have a long talk, and get some business advice.

Her father was prominent Nashville businessman Andy Rogers, who died in 2018 at age 87. His business holdings at one time or another included the Nashville House, the Brown County Inn, The Seasons Lodge and Conference Center, The Ordinary restaurant, and about two dozen retail shops he rented to others. He also managed the Abe Martin Lodge and helped build banks in Nashville and elsewhere. When he died, the Brown County Democrat called him “the man who built the business framework for Brown County.”

Now Andi and her husband Lance Bartels, a pilot for UPS and businessman, own the Nashville House and its adjacent buildings. The Nashville House was her inheritance when her father died. Antique Alley— which has space for 14 shops—as well as her parents’ home and more than 100 acres outside Nashville, were purchased by the couple at auction last year.

The Bartels don’t plan major changes to their business properties, other than maintenance, upkeep and some rebuilding. The Nashville House is currently closed for remodeling as outdoor seating is added and its electrical system is updated. Those are among the largest changes planned.

But businesswoman is just a part of Andi Bartels’ identity. Her first priority is her family, which includes her son Nolan, 12, and daughter Ella, 9. Her fulltime job is teaching art at Brown County High School, her lifetime dream job. She also teaches an online art class for Indiana University, is a tennis coach for Brown County Junior High, is on the board of the Brown County Art Guild, Indiana Heritage Arts, the Parks and Recreation Department; and volunteers for various other community organizations and events.

“I like to have multiple things going on,” she said. “I prefer to stay busy.”

The youngest of five daughters, Andi remembers following her dad around everywhere he went. 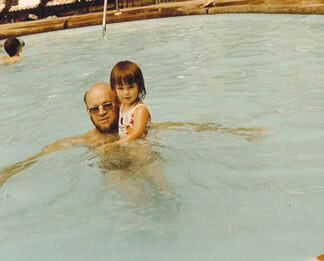 “When I was growing up, he was a really good dad. He taught me how to swim, and we went on vacations together. I grew up at the Nashville House. I learned how to count change there.” She also worked at the restaurant, bussing tables, being a waitress, and working in the kitchen. Her first job at age 14 was helping with children’s activities at Abe Martin Lodge.

She graduated from Brown County High School in 1999, where her love of art grew. But art has always been a part of her life. Her mother, Fran, was a painter, and her mother-in-law, artist Patricia Bartels—who she describes as one of her best friends—have been major influences.

Andi, now 39, was born at Bloomington Hospital and has lived in Brown County all her life, except the four years she spent at Miami University in Ohio.

Although it may have been easier for her to go through life being known mainly as Andy Rogers’ daughter, Andi said that was not for her. Instead, a reason she chose to go to college in Ohio was to get away from that image and forge her own identity. At Miami, she graduated with a degree in art education, met Lance, and forged friendships that remain strong today. She later earned a master’s degree in education administration from Ball State University through their online learning program. 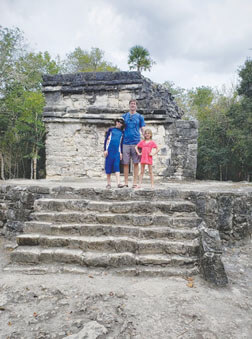 Her first job after college was teaching art for all students, K-12, at Medora, Indiana. She spent four years there before becoming a part-time art teacher at Brown County Junior High, sharing that job for five years with Patricia (who was Andi’s art teacher in junior high). When Patricia retired, Andi had the opportunity to take the junior high job but didn’t want people to think she hadn’t earned it on her own.

Instead, she took a job in admissions of Harrison College in Columbus, and later became registrar for two years. But the hours were hard on her family, so she took a job teaching art at Richards Elementary and later Mt. Healthy Elementary for Bartholomew Consolidated School Corporation. She was hired as the Brown County High School art teacher at the beginning of the current school term. 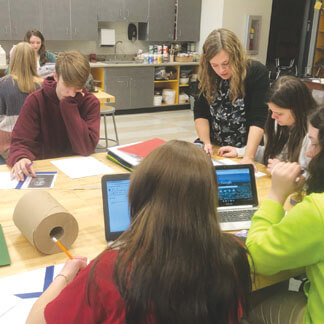 Andi in the classroom at Brown County High School.
photo by Bob Gustin

As an art teacher, she values natural talent and ability, but doesn’t necessarily grade on “how amazing” their art is.

“I want all kids to be comfortable with art. It’s something everybody can access, enjoy, and appreciate. For me, it’s a need. I need to be able to create, to make something.” That art may be expressed in many ways, from her daughter’s birthday cake to Halloween costumes for friends, to more traditional forms.

“This is the job I’ve always wanted. I had always envisioned myself eventually teaching art in Brown County and helping out with the businesses,” she said.

Andi admits life can be stressful, but says she’s excited about the changes.

“If you don’t take chances, you don’t get anywhere.

“I plan to live here the rest of my life, raise my kids, and be involved in the community.

“Family comes first. Everything Lance and I do revolves around the kids. We like spending time with them, riding dirt bikes, going to sporting events, or just hanging out with them.”

But the Nashville House is also family, in a way.

“Growing up, the Nashville House was always the center. It was home for me and my sisters, and we spent lots of time there.” The structure was built in 1867, was purchased by Andy’s father, Jack, in 1927, burned in 1943, and was rebuilt a few years later.

“The whole town of Nashville has an emotional attachment for me,” she said.

“It makes me sad I didn’t get more time with my parents as an adult. I could use some of that Andy Rogers advice right now.”
Andi is optimistic the new Brown County Music Center will bring more visitors to Nashville, but hopes the town retains its character, while adapting to the 21st Century. She doesn’t want to see it become a glitzy tourist attraction, but also doesn’t want it to take on a historical reenactment air.

“It needs to be a dynamic place where things change, but still has the same feel,” she said.

Somehow, it seems, she got that fatherly advice for which she yearns. Here’s what Andy Rogers said in an Our Brown County article in 2002:
“People say, ‘Well, we can’t change.’ But we can change and still retain some of the flavor of Brown County. We need people to live here. I’m in the tourist business but we don’t want to turn this town over to the tourists. You can go to Gatlinburg if you want to see what happens to a town that turns it all over to business. It’s not a town anymore—it’s a shopping center. We need people here. This town needs to be alive.”
Andi agrees.